It’s so nice to hear that the work we do everyday, makes a difference. Saves lives.

We thought it was worth sharing.

Sebastian Zarenbski, a former student with Siren Training and his colleague Joachim jumped into action when he noticed a colleague collapse in work on Tuesday morning. Sebastian and Joachim work @JamesEngineer1 construction company. Read  our trainer @AshWebberLive letter:

Here’s a quick report from SEBASTIAN ZARENBSKI, one of my learners who on Tuesday of this week, saved someone’s life. He contacted Lawrie on the phone on Thursday and asked me to get in touch.

He attended one of Siren’s open courses at London Bridge. He said it was Jan ’18.

On Tuesday 24th September, he had arrived at his place of work. As he was walking up the staircase, he noticed a guy in front of him looked pretty tired. Suddenly, the man leant forward clutching his chest and then fell back hitting his head on the wall. He was unresponsive. Fortunately, Sebastian immediately conducted a primary survey & ascertained he was not breathing. He was able to brief one of his colleagues what to say to the emergency operator.

Sebastian began CPR. Fortunately, the defib was only on the next floor – so he arranged for it to be brought to him. CPR continued until it arrived. There was no response after one shock on the defibrillator. CPR continued until the next cycle. After the next shock, he began to cough, and Sebastian was happy with his breathing & rolled him onto his side.

At the point of being taken away by the ambulance, he was responsive. Current word is that the casualty is receiving further treatment in hospital.

Having spoken to Sebastian on the phone, he told me the casualty’s name is Hayden, approx. 40 years of age and to top it off, it was his first day with the firm. His new colleagues saved his life! Presently, Sebastian is happy to stay in touch and connect via FB etc. He’s happy for you to share the story. 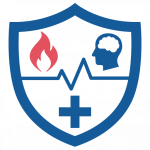